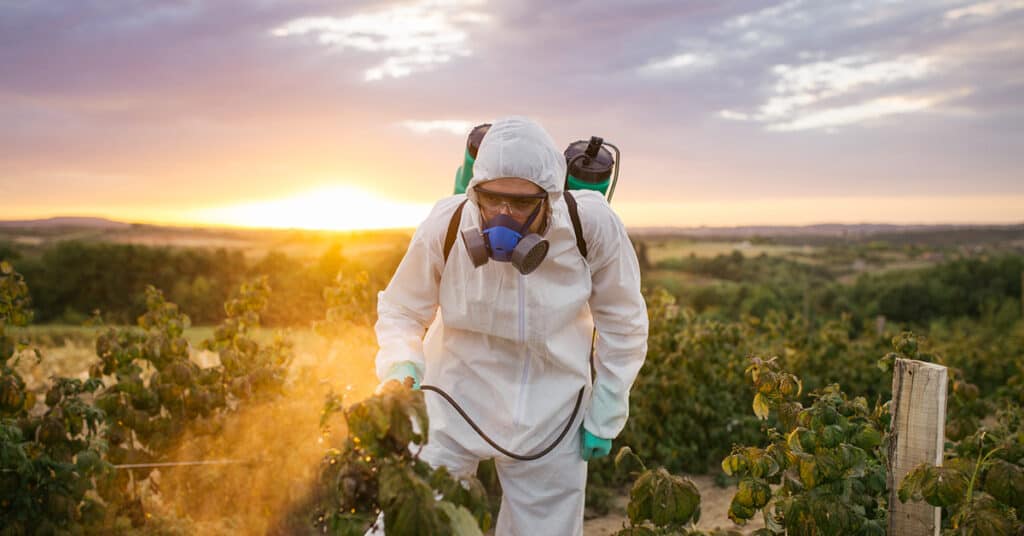 Paraquat is a popular herbicide used primarily for weed and grass control. It is classified as restricted use by the EPA, and only licensed applicators are allowed to handle the toxic chemical. Paraquat is extremely poisonous, and exposure may cause severe reactions.[1] The Agricultural Health Study reported that farmers who worked with paraquat were twice as likely to develop Parkinson’s disease.[2] If you were exposed to paraquat through work or proximity to a farm and have developed Parkinson’s disease, you may be entitled to financial compensation. Contact Counsel Hound for a no-cost consultation and case evaluation.

A study by AHS found that those who worked with paraquat were twice as likely to develop Parkinson’s disease compared to those who did not work the chemical. The risk of developing the disease from paraquat exposure was increased if the worker did not regularly wear gloves.[3] Parkinson’s disease is a nervous system disorder primarily affecting movement. The symptoms of Parkinson’s develop slowly over the years, and it often makes daily tasks difficult for those diagnosed. Approximately one million people in the U.S. are living with the neurodegenerative disease. There is no cure for Parkinson’s, but supportive care treatments are available.[4]

In the U.S., paraquat contains safeguard additives to protect people from exposure and poisoning:

Paraquat exposure is most often due to ingesting the chemical. Skin exposure can also cause poisoning depending on the length of exposure, the concentration of paraquat, and the condition of affected skin. Inhaling paraquat is another cause of poisoning, and it can result in lung damage. Workers licensed to apply paraquat are the most at risk for exposure.

Ingestion, skin exposure, and inhalation are common causes of exposure that can lead to the victim being poisoned. The extent and harmfulness of the poisoning depends on the type, amount, and duration of exposure to paraquat. The most direct and immediately harmful damage occurs when the chemical comes into contact with the lining of the mouth, stomach, or intestines. Paraquat is distributed throughout the body after exposure and causes toxic reactions to occur throughout the entire body. The organs that are typically most affected include kidneys, liver, and lungs.[5]

There is no cure or antidote for paraquat poisoning. The first step in treatment is decontamination: removing paraquat from the body. If the victim was exposed orally, activated charcoal might be administered to prevent further absorption. If the ingestion-caused poisoning is treated within an hour of exposure, nasogastric suction may be utilized. There is no cure for paraquat poisoning, but supportive care measures are available to those affected. Options include intravenous fluids, medications, ventilators, and dialysis. Oxygen administration may worsen paraquat poisoning, so it should be avoided if possible. The method of support care varies depending on the cause and extent of poisoning.[6]

Symptoms depend on the method of exposure and the amount/concentration of paraquat.

Signs of a small to medium amount of paraquat ingestion may take effect within days to weeks of exposure:

Signs of a large amount of paraquat ingestion are usually visible within hours or days of exposure:

The CDC notes that ingesting a large amount of paraquat will likely lead to death.[7]

Exposure to paraquat has been linked to Parkinson’s disease in the long term.[8]

Paraquat exposure and Parkinson’s disease can leave you with physical, emotional, and financial hardships. Our Counsel Hound lawyers will work to maximize your settlement or award. Types of compensation you may be eligible for include economic and non-economic damages.

Some damages cannot be proven with lost wages, property damages, etc., and you and your loved ones may face emotional suffering as a result of the disease. Our lawyers will work to include all available compensation in your case.

Why file a lawsuit?

Filing a paraquat claim can help:

How long do I have to file a paraquat claim?

The amount of time you have to file a paraquat claim depends on the statute of limitations in your state. Contact Counsel Hound to discuss your eligibility.