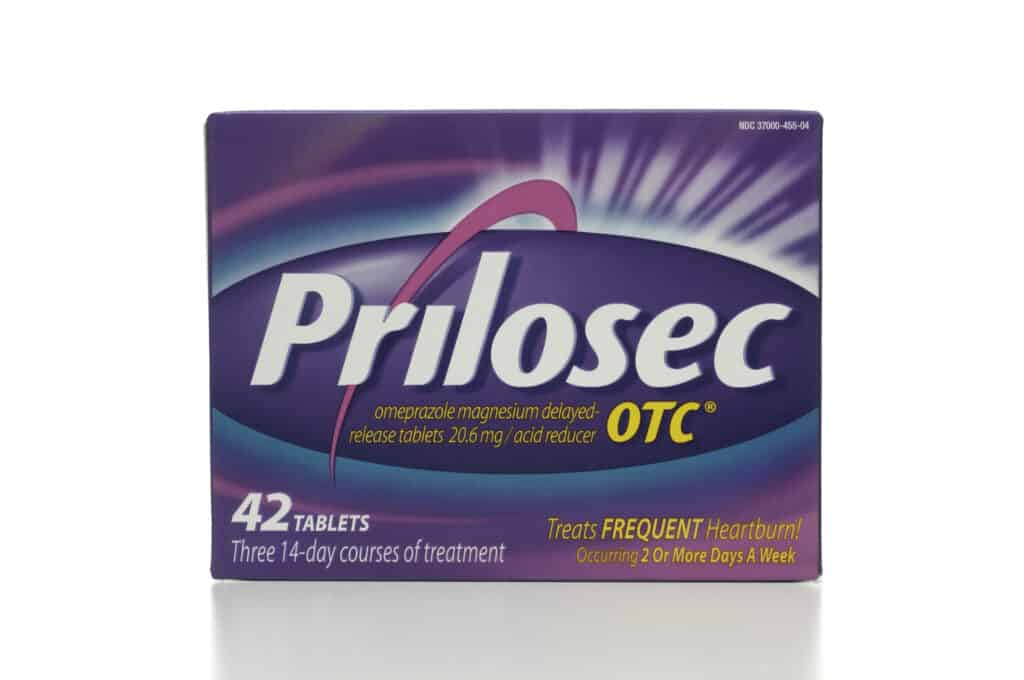 Prilosec is a proton pump inhibitor (PPI) used to treat gastroesophageal reflux disease (GERD), stomach ulcers, and other stomach acid conditions. Prilosec lawsuits claim the long-term use of PPI drugs may result in serious life-threatening health conditions. Contact Counsel Hound for a no-cost consultation and case evaluation if you are suffering from kidney damage, disease, or failure after taking Prilosec.

Prilosec is FDA approved to treat:[2]

According to the FDA, over-the-counter Prilosec should not be taken for more than 14 days, and patients should not take more than three 14-day courses in a single year.

Common side effects of Prilosec include:[3]

Researchers have linked the long-term use of Prilosec and other proton pump inhibitors to several serious health conditions. Prescription and OTC Prilosec have the same serious risks associated with long-term use, according to studies.

Researchers at Washington University School of Medicine discovered longtime use of proton pump inhibitor medication resulted in a 50% higher risk of dying in the following 5 years compared to those who used H2 blockers to treat stomach acid conditions. Long-term use was defined as use spanning a year or two.[5] Several studies have linked proton pump inhibitors to increased risks of stomach infections, children born with asthma, ischemic strokes, life-threatening irregular heartbeats, and loss of brain functions.

There have been over 15,000 lawsuits filed against the manufacturers of Prilosec and other proton pump inhibitor medication manufacturers. The individuals claim they have suffered injuries as a result of the medications, and the lawsuits allege that the manufacturers of Prilosec failed to warn doctors and patients of the possible side effects, including kidney failure, kidney damage, and acute interstitial nephritis (AIN). The cases against several proton pump inhibitor manufacturers were combined into multidistrict litigation. It became the second-largest mass litigation in the U.S. by 2019.[7]

Prilosec kidney damage may leave you with physical, emotional, and financial hardships. Our Counsel Hound lawyers will work to maximize your settlement or award. Types of compensation you may be eligible for include economic and non-economic damages.

Some damages cannot be proven with lost wages, property damages, etc., and you and your loved ones may face emotional suffering as a result of Prilosec. Our lawyers will work to include all available compensation in your case.

Why file a lawsuit?

Filing a Prilosec claim can help:

How long do I have to file a Prilosec claim?

The amount of time you have to file a Prilosec claim depends on the statute of limitations in your state. Contact Counsel Hound to discuss your eligibility.